Travel Mongolia on horseback with experienced guides of Stone Horse Expeditions – offering more than 30 years experience in wilderness guiding, conservation and eco-tourism. The Stone Horse Team is made up of Mongolian and international personnel who have worked in tourism and wilderness travel for many years.

As adventure tour operators, we take special pride in the quality of our horse riding tours into some of the most pristine and naturally beautiful areas of Mongolia’s parks, and in making your holiday an unforgettable horse trek adventure.

Keith Swenson and Sabine Schmidt are the owner/operators of Stone Horse Expeditions. 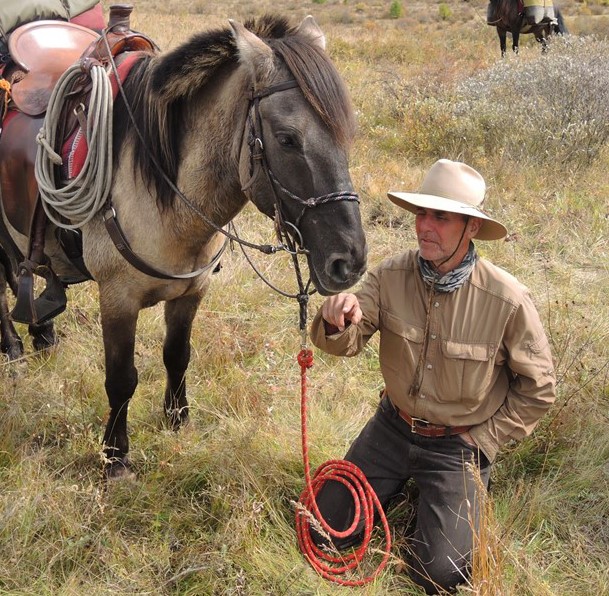 Keith  has many years of experience with wilderness expeditions, managing protected areas and advising on tourism operations in national parks. With Stone Horse, he focuses on high-quality, low impact horse riding adventures – a passion he has held since growing up and working with horses on his father’s farm. Early in his career, Keith worked as a wilderness ranger and whitewater kayak and raft guide in Idaho, USA. At the same time, he enjoyed ice and alpine climbing in Canada, New Zealand, Nepal and the Antarctic. In Antarctica, he spent many years as a survival instructor and safety coordinator while guiding expeditions and research groups. He also worked as a team leader and station manager for an international effort to protect the Antarctic continent and ocean. While living in New Zealand, and becoming a permanent resident, he helped found the New Zealand Nature Institute and concentrated on forest protection with the Waitutu Forest project near Fiordlands National Park. From New Zealand, Keith took up one of his most challenging positions: field manager for a large wildlife sanctuary in the Sultanate of Oman. He oversaw the Bedu ranger staff, developing tourism operations and running anti-poaching units. Keith has also worked with protected area and tourism programs in South Asia (Sri Lanka and Laos). Arriving in Mongolia to assist with the development of ranger training and the national park system, Keith easily took advantage of the horse culture in exploring the country and then inviting guests to join in his horseback adventures. Stone Horse Expeditions & Travel was born out of this fascination for the wild and admiration for the tough Mongolian horse. Sharing his passion for wilderness travel and horses with guests has become the essence of Stone Horse Expeditions & Travel as the provider of the finest horseback expeditions in Mongolia. 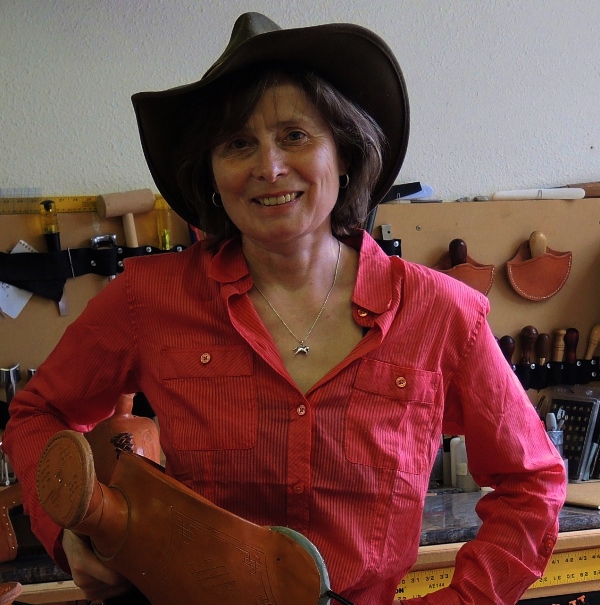 Sabine has spent much of the last 20 years in Mongolia working on conservation projects and has had a leading role in developing our horse tours in the Khentii. She also knows the Gobi area and its many herder communities well. Sabine sources much of our expedition equipment and supplies, oversees meal planning and cooking and is in charge of saddles and tack. She is a trained saddle maker and usually spends a couple months in the off-seasons in Oregon, USA, to build “Stone Horse”- Saddles, our lightweight trail saddles. With an adventurous spirit, a commitment to conservation and a PhD in earth sciences, Sabine started her career in Antarctica, exploring the icy wilderness from a year-round base with a small overwintering team, documenting the threats to the last untouched place on earth. She later guided for Antarctic ecotourism expeditions – ensuring visitor safety and sound ecological conduct. Inspired by the stark beauty of pristine wilderness, Sabine began to write and photograph for conservation awareness, continuing in New Zealand where she co-founded the “New Zealand Nature Institute”. The “Secret History of Mongolia” had been among her reading at the polar station, and years later, she encountered the images this evoked – working with herder communities in Mongolia’s Gobi desert in the country’s largest National Park to preserve landscapes, wildlife, and grazing resources. When not in the desert, she spent her time riding with Keith, exploring the wilderness areas that are now Stone Horse destinations. Sabine has been a key player in the “Initiative for People Centered Conservation” in Mongolia, and forged links to worldwide efforts highlighting nomadic peoples and their traditions in managing the great grasslands on earth. She continues to consult for programs in East and Central Asia, focusing on community based conservation. Sabine’s favorite time is on the trail, riding “Good Boy” or “Little Star” while taking care of guests and sharing past and present experiences of the wild. 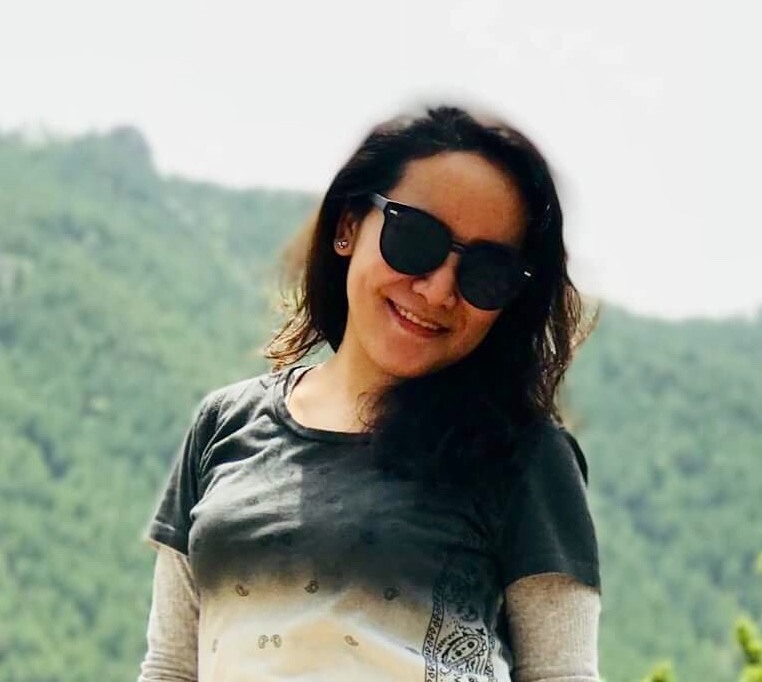 Erdenebolor – or Eegi, is the senior administrative staff member, supporting management with all tasks related to guest reservations and logistics, business licensing and partner relations, and other work to keep Stone Horse operations sound and efficient. With a degree in Business Administration from the National University of Mongolia, long term work experience in the travel and hospitality sector and having lived and worked in the USA for seven years, Eegi brings a great background to her work with Stone Horse Expeditions. And equally important, she has a keen interest in nature and conservation, looking at furthering her formal education in this field. Her free time is devoted a lot to reading books, and mostly – her teenage daughter. 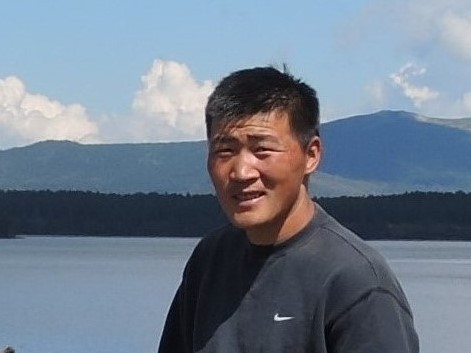 Byambaa has been with Stone Horse from the start, and is now our Lead Horseman. He makes sure saddle and pack horses are ready to go when needed, and takes care of the herd in camp – turning them out for grazing,  and keeping them safe at night. He is an experienced packer now and has the routine of setting up and breaking camp down. Guests are impressed when we arrive at a campsite and everything comes off the pack horses and our wilderness camp takes shape quickly. On days when riders take a longer route to explore the scenery, Byambaa and the other horsemen go ahead with the pack horses – always appreciated by our guests when we ride into camp with the table already set!  Throughout the year, Byambaa helps with keeping the horses healthy, happy and saddle ready, and assists with maintenance of expedition equipment. He is from Mongolia’s West and grew up in a herder family, riding horses from an early age. He now lives in Ulaanbaatar and has a young family. 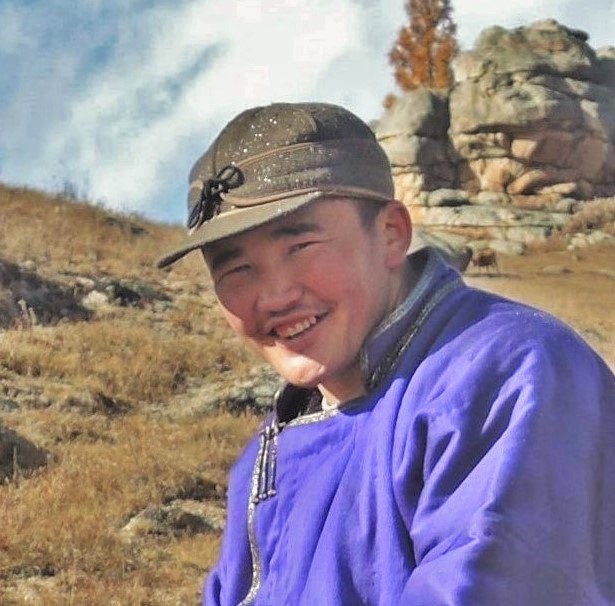 Batkhishig, who prefers to be called Hundag, started as a horseman with Stone Horse in 2017. He had helped out before and was really keen to join the team. He hails from the same district as Byambaa, in Uvs Province in Mongolia’s far West. Hundag’s parents are still herders out there and Hundag proudly talks of the herd of horses they run. Our guests have come to know him as a very hard worker, always helpful and attentive. Being a student of history at the Mongolian National University, Hundag is also keen to share his knowledge about his country with guests and likes to practice his English skills which are rapidly improving. It’s easy to see that he grew up on horseback when you watch him take off on some of our more spirited, young horses – something he greatly enjoys. He loves being out there and on horseback, and we are very glad to have him. Like all the young horsemen working with us, Hundag is a wrestler and likes to practice his skills as much as possible. His wrestling strength comes in very handy when packing horses and setting up and breaking camp. . 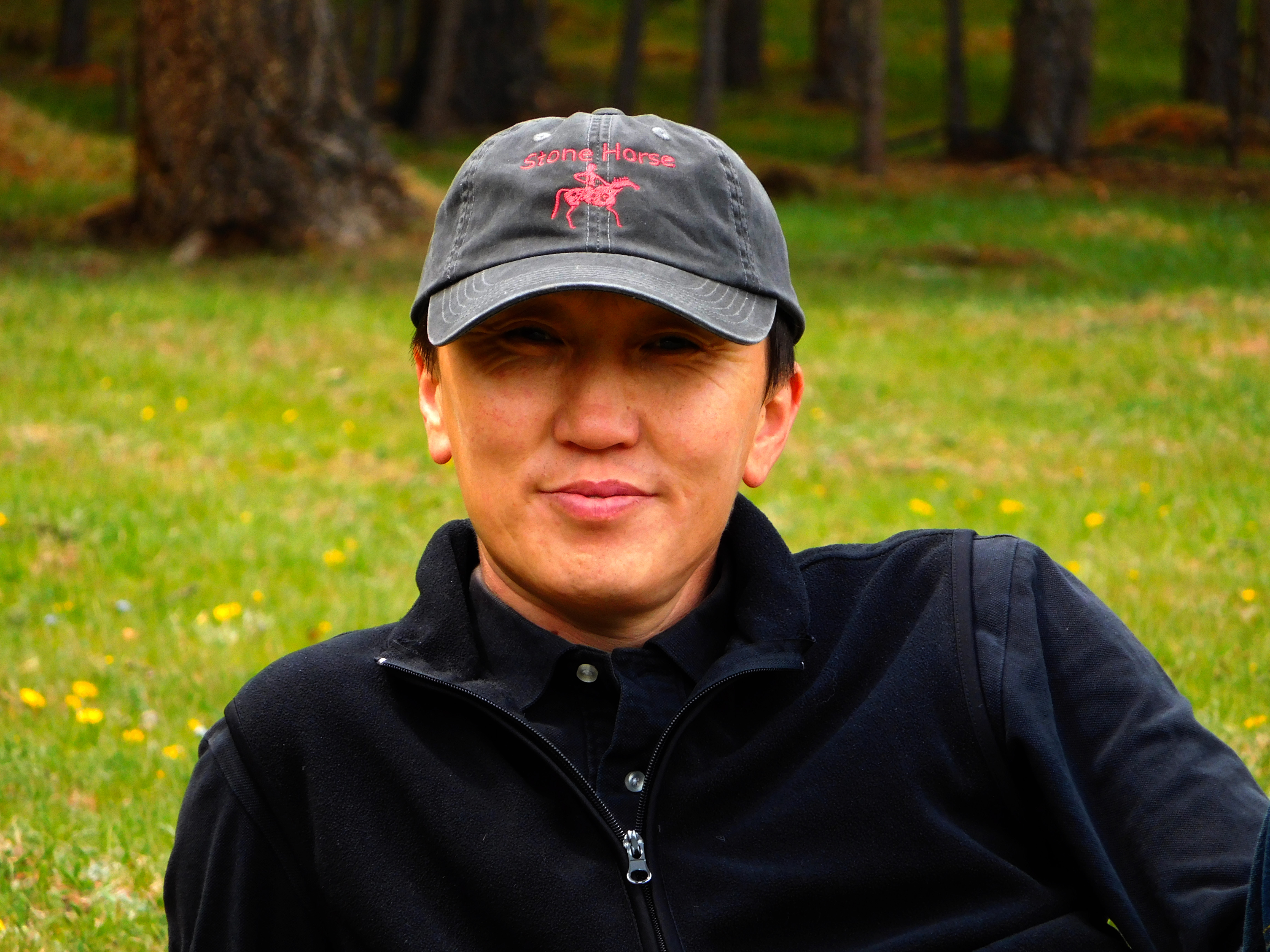 Davaa is the driver for Stone Horse Expeditions in Ulaanbaatar. You will meet him at the airport where you recognize him among the crowd of waiting drivers holding your name sign. Davaa will take you to your hotel, and to the Darkhid Valley on the morning when your riding tour starts. Davaa is popular with our guests for his guiding on the city tour or to other nearby day trip destinations like Hustai Nuruu National Park, the Chinggis Statue “Tsonjin Boldog” or to the Manzushir Monastery ruins South of Bogd Khan Mountain. Davaa speaks German and English. Having grown up in the city of Erdenet, Davaa now lives in Ulaanbaatar with his wife and young son. 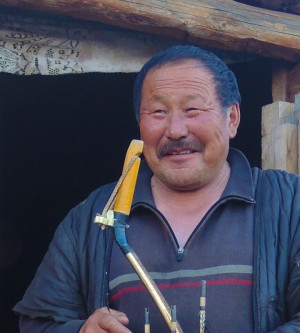 Yadmaa is the herder of the Stone Horse herd; he and his wife Davasuren are the hosts of the herder home stay or “Ger Stay” that is popular with Stone Horse guests on a short visit to Mongolia. Yadmaa comes from Western Mongolia’s Uvs Province from a family of recognized herders and horsemen. He has been herding his own herd of cattle, goat, sheep and horses in the Darkhid Valley for nearly 30 years. He is a skilled craftsman in traditional Mongolian leather working, maintaining the skills of horsemanship when fashioning lariats and hobbles from rawhide. Yadmaa is a keen observer and knows the valleys, forests and wildlife of the area very well from decades of daily horseback patrols around the area. 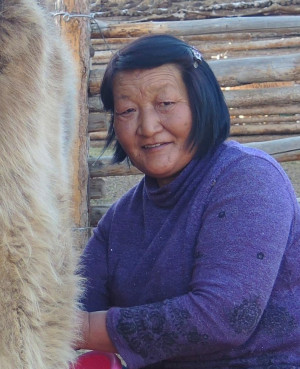 Davasuren is an experienced herder and specialized in dairy cows and processing; she is    known for cooking great meals for Ger Stay Guests- good traditional Mongolian home cooking, but with  modifications including vegetarian if requested by guests. Davasuren comes from Ovorkhangai Province but has been in the Darkhi Valley for over 20 years. While Davasuren is already more than busy with milking cows, looking after livestock and guests, she is also the community leader of the Darkhid Community of local households. Stone Horse Expeditions & Travel, with the New Zealand Nature Institute, the Darkhid Community and local government is actively involved in ecological restoration, land rehabilitation, and environmental education to protect local natural resources and help with maintaining the watershed. 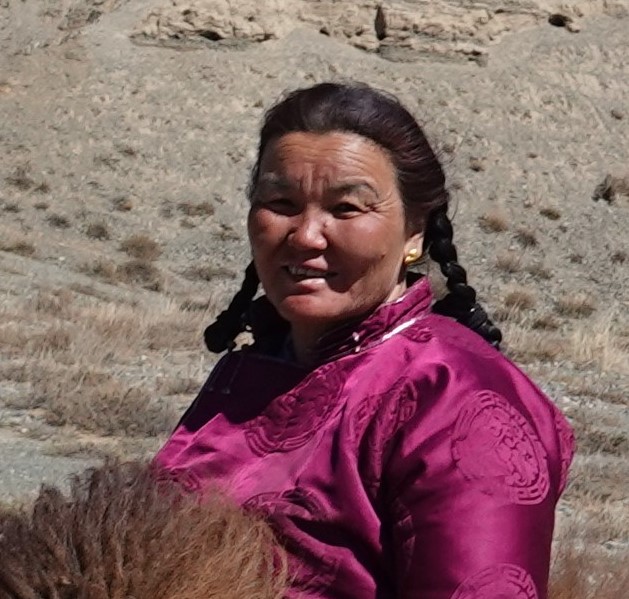 Duya is who you want traveling with you for an authentic and fun Gobi experience. A native of the South Gobi, Duya’s experience ranges from veterinary technician, camel herder, vegetable grower, community organizer, and mother-of-five. Duya operates a small guest house from her home, and she leads our Gobi tours when tailor made and genuine is requested. Traveling with her, you can’t fail to notice that Duya is known, liked and respected by everybody along the way. She knows everybody from her various local careers. You are in safe hands with Duya on your Gobi adventure, meeting the community and visiting places off the beaten track. 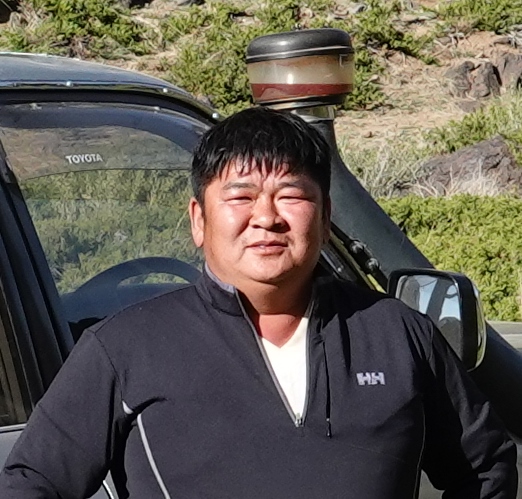 Otgonbaatar is the head driver for our Gobi tours. Having grown up in the South Gobi, he knows the tracks and the lay of the land. He has been driving for many years, and learnt his skills driving a Russian microbus first, but has long switched  to his own Land Cruiser. Being local and having worked for many years with a Gobi conservation program, Otgonbaatar has great knowledge of and concern for the environment and communities, and he is well known among the locals. He knows all-season travel in the Gobi, and if he can’t drive himself for a tour, he will provide a reliable driver and car from among his fellow Gobi drivers that he recommends for Stone Horse Gobi tours.

Preparing for Your Gobi Adventure

About Us
We offer guided horseback riding expeditions through the cultural and wilderness landscapes of two of Mongolia’s premier parks, Gobi desert tours, hiking trips and herder family ger (yurt) stays. Our team of experienced trip leaders and guides is made up of Mongolian and international personnel who have worked in conservation, tourism and wilderness travel.
Featured Expeditions
Recent Posts